Sutton is the only London borough to host an Admiral Nurse Service. The service, which was introduced in March 2014, is operated as a partnership between Sutton Council, NHS Sutton CCG and Dementia UK, the national charity that develops and maintains Admiral Nursing.

Admiral Nurses are specialist dementia nurses who play a unique role in care management by joining up the different parts of the health and social care system, so the needs of family carers and people with dementia can be addressed in a coordinated way.

The Admiral Nurse Service, which is co-funded by Sutton Council and NHS Sutton Clinical Commissioning Group (CCG), has 4 specialist nurses who support local families living with dementia. The service was increased from an initial pilot of one to four nurses thanks to significant additional funding by NHS Sutton CCG.

The bill for caring for a person with dementia costs the NHS on average £32,000 a year. Dementia Nurses are a proven way of keeping costs low and also offering a bespoke service to patients. A dementia nurse costs around £50,000 (includes salary, pension, travel), they have 30 to 40 patients and try and keep people with dementia in their home, supporting their carers.

Dementia is an important issue in Sutton and much of the country and the Sutton Council recognises this. That is why over 50 per cent of their councillors are Friends of Dementia - which is a course that people can go on to better understand the different types of dementia. Find out more about the Admiral Nurse service and how to become a Dementia Friend. 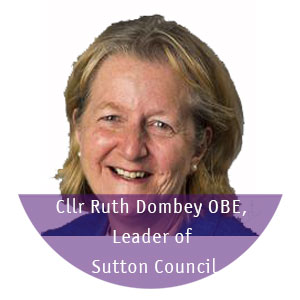 “We employed one Admiral Nurse in 2014 and it was so successful that we decided to expand the service. So we have now got four nurses working with more than 200 people in the borough.

“The service the Admiral Nurses provide is as important for the people living with dementia as it is for their carers and their loved ones, because it provides people with coping mechanisms and helps them to understand what’s happening.”