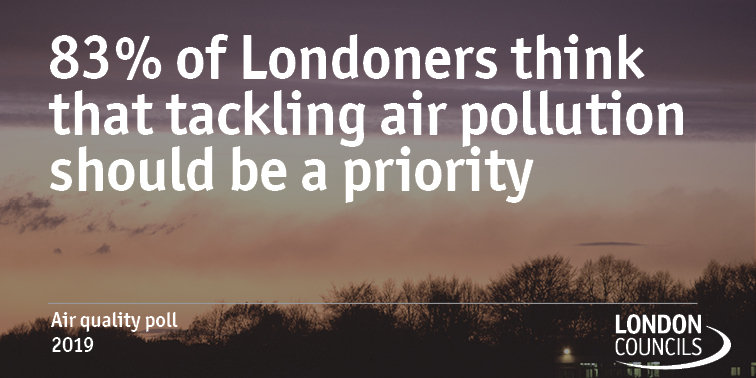 The London Councils air quality publi polling 2019 shows what Londoners think about air quality and how this is affecting their everyday lives. As the polling is now in its fourth year, it also identifies trends and changes in opinion over that time period. Each year we have reviewed and added to the polling, so some questions do not have trend data from 2016. The 2019 polling, for example, posed a number of new questions to get a better understanding of the public’s attitudes to other topics such as cycling safety in London and the uptake of electric vehicles and public transport usage.

Air quality continues to be an important issue in London (and will likely be a key topic during the Mayoral elections next year). With more and more research now being published on a regular basis, our understanding of the detrimental effects that air pollution has on society is widening. Recent research suggests that air pollution affects every organ in the body, while other studies continue to expose the link between air pollution and neurological and cognitive development in children.

In 2016, London Councils conducted the first polling of Londoners to understand their awareness and views of the issues posed by air pollution, and how, if at all, it affected their lives. This work helps boroughs in their efforts to improve air quality in London by better understanding the public’s awareness and views. Now in its fourth year, the polling shows a number of gradual trends in terms of increasing awareness and knowledge on the topic, but also a few significant differences on decision-making for example.

The government published its final Clean Air Strategy in January 2019 following consultation3. The strategy sets out how the government will tackle all sources of air pollution (excluding road transport). It makes a number of proposals, including:

A number of these proposals will require legislative change, and these are anticipated in the forthcoming Environment Bill. London Councils is working with Defra colleagues, GLA and borough officers to influence key aspects of this bill.

The proportion of respondents who felt they were aware of air quality issues has increased each year since 2016; to 92 per cent from 83 per cent. There is a noticeable increase in those who feel they are very aware from 2016 as well – increasing from 29 per cent to 46 per cent. 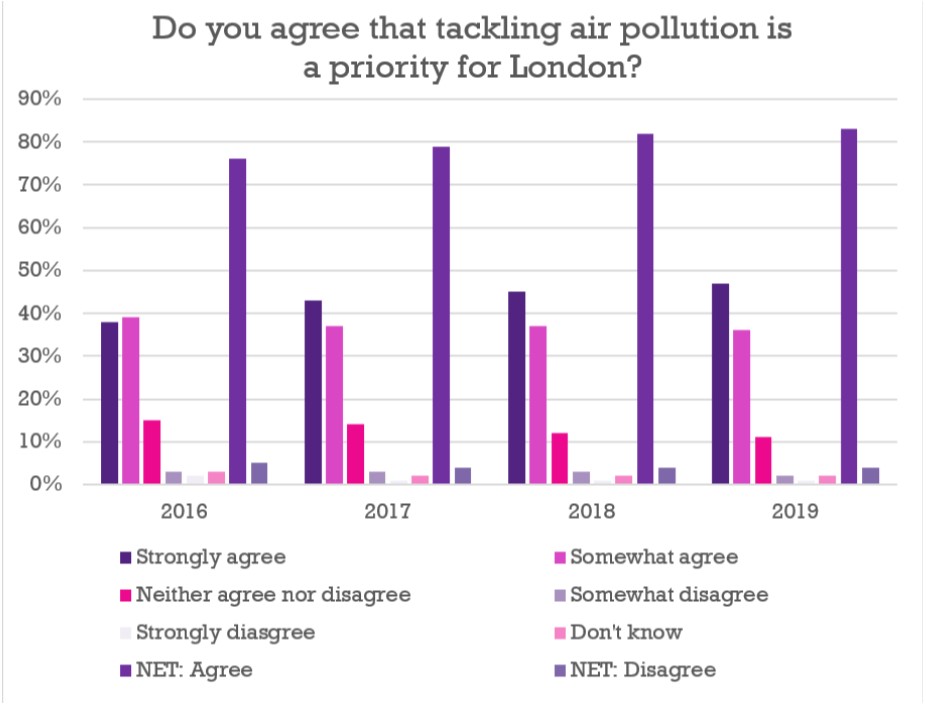 This year an equal amount of people felt that cars and vans and lorries are the main causes of pollution (22 per cent) followed by industry (11 per cent) and roadworks (6 per cent).

Change in air quality over time

62 per cent of respondents felt that London’s air quality had changed in the past 12 months; of these over half (56 per cent) thought the change had been negative.

Over half of respondents (53 per cent) said they felt that their health had been affected by poor air quality (up from 46 per cent in 2016), with breathing difficulties and asthma getting worse and coughing the most frequently reported symptoms. Whilst the proportion of people who felt that their health had been affected is high across all age-ranges, it is especially high for 25-34 year olds at 71 per cent. 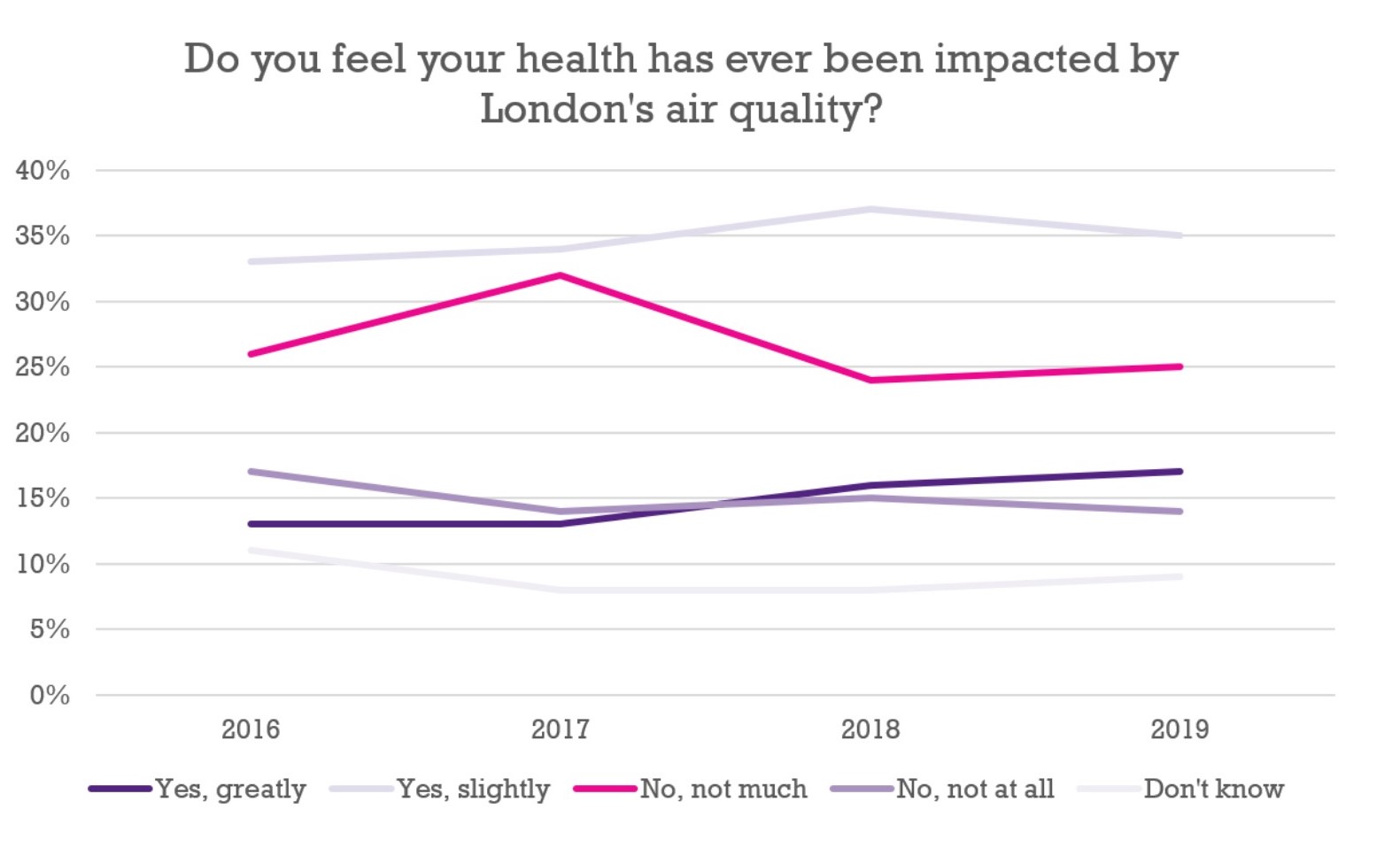 18 per cent of respondents said their children had suffered ill health due to poor air quality. This is a significant increase from 12 per cent in 2016.

Two thirds of all parents in London (60 per cent) say air quality affects their choice of school for their children; this is compared to 50 per cent in 2017.

Half of those questioned (50 per cent) say air quality affects where they choose to live in London, compared to 38 per cent in 2016. People aged 16-44, as well as those with children, and those who feel their health is affected by air pollution were more likely to say this.

Nearly half of Londoners (46 per cent) said air quality impacts on their commuting decisions. This was highest among those who cycle, are in employment, have children, and those who are aged 25-34.

Responding to a new question in 2019, 52 per cent of people said that air quality influenced their decisions regarding outdoor activity/physical exercise. Only a quarter of respondents stated that air pollution does not impact on their decisions at all.

Nobody said they felt that transport companies (such as vehicle manufacturers) are responsible. Those who have lived in London for over five years are more likely to say the Mayor than those who haven’t been here as long. At 38 per cent, more people now think that individuals are responsible for improving air quality than in 2017 (29 per cent).

Car ownership in London has grown every year since 2016 with 60 per cent of respondents  now owning one car or more, compared to 54 per cent of Londoners in 2016. This was higher for those living in outer London and those who are 65 years old and over. There is a big difference in car ownership between parents and non-parents (83 per cent of parents have a car, while half - 49 per cent - of non-parents do). Less than 1 per cent said that they used a car club.

When asked what would encourage them to buy an electric vehicle (EV), Londoners surveyed pointed to: environmental considerations (24 per cent); tax incentives (21 per cent); improved charging infrastructure (20 per cent); and improved government funding grants (17 per cent).

When asked whether they would consider not owning a vehicle if they could get access to a car by other means when they needed one, e.g. through a car club, 39 per cent said yes, with a third saying no and a third saying don’t know. Those who said yes were more likely to be younger (aged 44 and below), live in inner London and cyclists.

This year we asked Londoners what they thought about ‘car free days’ as a way to combat air pollution. 31 per cent thought they would be a good way of reducing air pollution; but the same proportion (31 per cent) thought car free days would cause too much disruption to individuals and local areas. 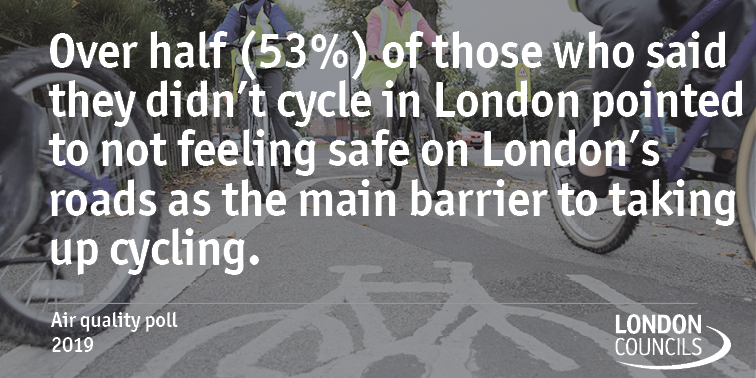 Over a quarter (28 per cent) said they didn’t think they were fit enough to cycle. The next most popular answer (23 per cent) was that it did not feel like cycling was convenient for them.

32 per cent of all respondents said that having less cars on the road would encourage them to take up cycling, or cycle more. This was followed by: having more segregated cycle lanes (30 per cent); nicer roads and streets to ride down (28 per cent); more secure bike parking facilities (23 per cent) and the associated health benefits (11 per cent) as the next most important factors in helping people to take up cycling/cycle more.

83 per cent of respondents use public transport either for commuting or for leisure/social reasons – this figure has not changed across all years of our polling.

Alongside the earlier stated aims of this research, London Councils will use this data to flag the concerns of Londoners to key decision makers to ensure that air quality continues to get the attention and traction it requires. There are a number of recent policy developments in London where this research could provide useful insight, such as the increasing installation of EV charging infrastructure, the Ultra Low Emission Zone (ULEZ), further implementations of variable parking charges and stated aims to increase the walking, cycling and public transport mode share through increasing liveable or healthy streets.

London Councils is working with the London Environment Directors' Network (LEDNET) and the Association of Directors of Public Health London (ADPH), as well as other key stakeholders, to maximise the impact of our work in improving air quality.

LENDET is the membership association for London's Environment Directors who work across the capital to deliver more effective and efficient environmental services. ADPH London is the association of London's Directors of Public Health and works to address certain issues on a pan-London basis.

To learn more about air pollution issues in London, you can view our report 'Demystifying air quality in London' here.