As part of Clean Air Day 2020 London Councils has published the results from our fifth annual poll of Londoners' views on air quality. The public polling sought to further gauge the public’s understanding of air quality issues with a focus on the effect of the Covid-19 crisis, and the impact it has on their lives. 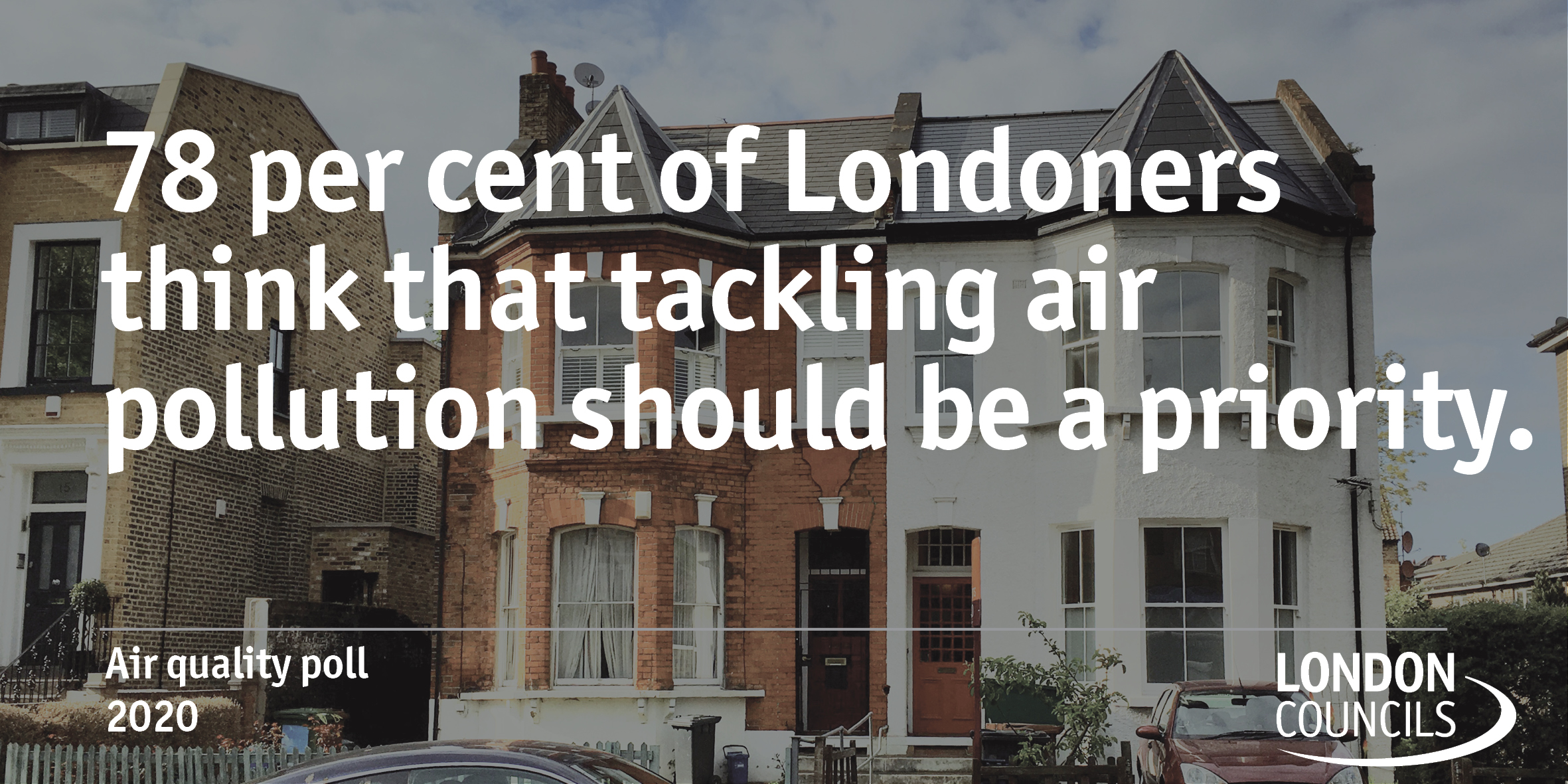 This fifth round of public polling assessing the public’s awareness and understanding of air quality issues in London is launched on Clean Air Day (8 October 2020). Clean Air Day is a nation-wide awareness raising campaign on the issue of air pollution. The polling helps us to understand what the public think about air quality and how this is affecting their everyday lives and also to identify trends and changes in opinion. The polling also posed a number of questions to get a better understanding of the public’s attitudes to other topics such as cycling safety in London, the uptake of electric vehicles, car ownership and public transport usage. Unless stated otherwise, all figures are statistically significant.

Over the past years, air quality has become an increasingly important political issue. The impact air pollution has on society is better understood now than ever before, with increasing amounts of research being done in this area.

Air pollution is a significant health, economic and environmental problem for the UK generally and in London specifically that requires determined efforts from a variety of stakeholders to address effectively. In London alone, air pollution contributes to in excess of 9,400 premature deaths every year, costs the health system up to £3.7 billion per year and damages building and other infrastructure and biodiversity through the formation of pollutants into acid rain.

In 2016, London Councils conducted its first public polling to understand the views and awareness of Londoners of the issues posed by air quality, and how, if at all, it affects their lives. Since then, this work has helped boroughs in their efforts to improve air quality in London by better understanding the public’s views. The results show gradual trends in terms of increasing awareness and knowledge on the topic, but also a few significant differences compared to the last few years, particularly as a result of the Covid-19 lockdowns. Each year we have reviewed and added to the polling, so some questions do not have trend data from 2016.

The Environment Bill 2019-21 has been reintroduced to Parliament in early 2020 aiming to make provision about targets, plans, governance and policies for improving the natural environment, of which air quality forms an important part. London Councils has been working with a range of stakeholders and borough officers to influence key aspects of the Bill.

Currently the Bill is being considered by a Public Bill Committee and London Councils have submitted written evidence to achieve the necessary changes to the Bill. Our key recommendations are:

• The Government should adopt the World Health Organisation target for PM2.5 as a legal limit to be met no later than 2030 and introduced as soon as is possible.

• The Government should introduce additional regulatory powers for local authorities to control emissions from appliances, such as gas and solid fuel boilers, combined heat and power plants, construction machinery and standby diesel generators.

• Government should look to review and align the tax system, such as fuel duty and other relevant taxes, with air quality and other environmental priorities.

• The Office of Environmental Protection should be more independent of Government. The choice of Chair and budget should not be the responsibility of DEFRA, but of Parliament.

• The Office of Environmental Protection should have the ability to levy fines against companies or Government, as the European Commission can currently does.

Full response can be accessed here. 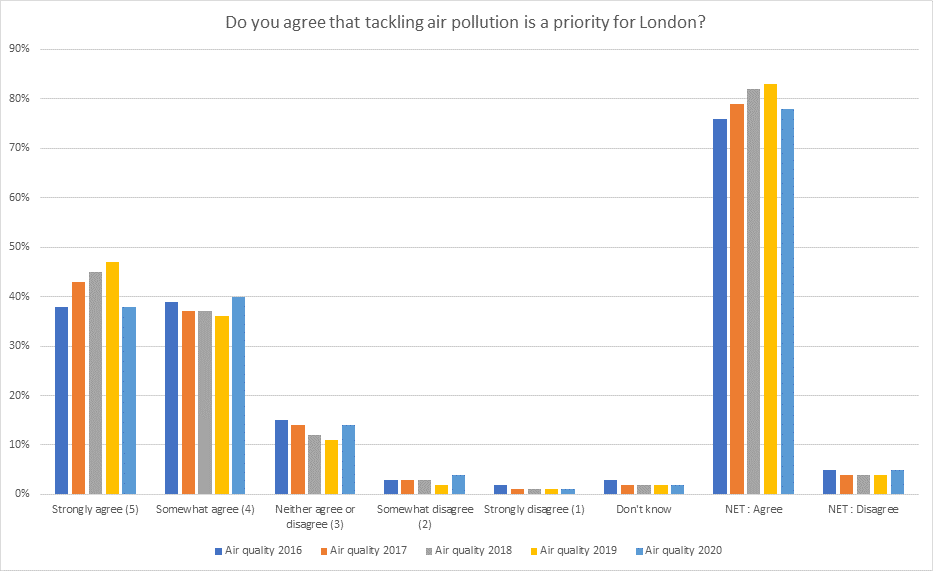 57 per cent of respondents believed that they were most exposed to air pollution when walking along a busy road.

Change in air quality over time

Of the people who felt London’s air quality had changed in the last 12 months (69 per cent, significantly up from 62 per cent in 2019) 67 per cent felt the change had been positive.

This is a significant change, as it is the first time in the history of the Air Quality polling that the majority Londoners have stated they believe air quality has improved in the last 12 months.

Change in air quality since Covid-19 lockdown in March 2020

Of the people who felt London’s air quality had changed since lockdown restrictions were introduced (84 per cent) 52 per cent felt that the change is mainly due to transportationrelated reasons. Fewer cars on the road (33 per cent) and generally less traffic (16 per cent) were identified by the largest proportion of respondents as the main causes of changes in air quality since lockdown.

43 per cent of respondents said they felt that their health had been affected by London’s air quality, with breathing difficulties and asthma being the most frequently reported symptoms.

Almost half of people (48 per cent) said air quality impacted on decisions they made regarding their health, compared to 39 per cent in 2016.

Two thirds of all parents in London (67 per cent) and a similar proportion of cyclists (63 per cent) say air quality affects their health-related decisions. This is compared to 40 per cent of respondents without children and 40 per cent of non-cyclists.

Nearly half of those questioned (45 per cent) say air quality affects where they choose to live in London, compared to 42 per cent in 2017 and 38 per cent in 2016. People aged 16-44, as well those with children, and those who feel their health is affected by air pollution were more likely to say this.

Over two fifths (41 per cent) said air quality impacts on their commuting decisions. This was highest amongst parents (58 per cent) and those who cycle (56 per cent). This is compared to 35 per cent of respondents without children and 33 per cent of non-cyclists.

54 per cent of respondents owned 1 car or more, this is compared to 60 per cent of Londoners in 2016. Only 1 per cent said that they used a car club service. 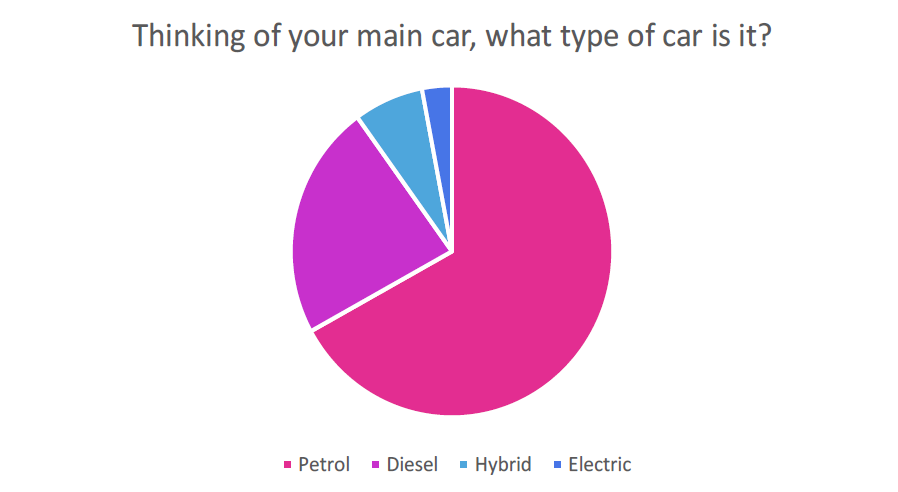 15 per cent of people in the survey said that they cycled in London as part of their commute (a decrease from 18 per cent in 2019) and 23 per cent said that they cycle for leisure (same level as in 2019). The cycle commuters are more likely to be male, younger (16 – 44) and living in inner London.

Almost a quarter of the cyclists who took part did not feel safe cycling in London (22 per cent). Women cyclists are more likely to feel unsafe cycling in London compared to men (27 per cent compared to 18 per cent), there being a very large difference in the per cent of men and women who said they agree they felt safe (68 per cent vs 47 per cent ). 50 per cent of non cyclists don’t think it is safe to cycle on roads in London due to traffic levels (though down from 53 per cent in 2019). This was followed by them thinking that they are not fit enough to cycle (24 per cent) and it is not convenient for them to cycle to their destination (20 per cent).

Alongside the earlier stated aims of this research, London Councils will use this data to flag the concerns of Londoners to key decision makers to ensure that air quality continues to get the attention and traction it requires. The London boroughs have a key role in tackling air pollution and have already taken a range of measures to tackle this, including action on engine idling, cleaning borough fleets, introducing variable parking charges and improving the urban realm to encourage more walking and cycling.

This research emphasises that Londoners are increasingly aware of the effects of air pollution and the impact it has on people’s health and wellbeing, especially children and those with respiratory conditions such as asthma.

We are dealing with a public health crisis due to the Covid-19 pandemic, which is shining a spotlight on the importance of good health. A growing number of Londoners want more to be done to challenge air pollution as it continues to make people unwell and restrict their life choices.

Unfortunately, in recent weeks there has been a rise in car-based travel as people are uncomfortable using public transport to complete their journeys. This is only adding to London’s air pollution and high congestion. We must take this opportunity to present green alternatives to sustain the better air quality Londoners have enjoyed in recent months.

London’s air quality continues to be a major public health issue. It is imperative we listen to Londoners and do not emerge from the Coronavirus public health crisis only to face a different crisis resulting from London’s toxic air pollution.

London Councils is working with the London Environment Directors' Network (LEDNET) and the Association of Directors of Public Health London (ADPH), as well as other key stakeholders, to maximise the impact of our work in improving air quality.

LENDET is the membership association for London's Environment Directors who work across the capital to deliver more effective and efficient environmental services. ADPH London is the association of London's Directors of Public Health and works to address certain issues on a pan-London basis.

To learn more about air pollution issues in London, you can view our report 'Demystifying air quality in London' here.

Click on the links below for that year's research results:

London Councils undertakes annual air quality polling work to understand the level of public awareness around, and attitudes to, the issues arising from air pollution in London.

When London Councils started this research in 2016, there was a lack of information/data on public opinion on air quality specific to London. Our polling data is addressing this and therefore will provide some much needed information for policy-makers. In the last few years more data on this issue has started to emerge. This information will inform our positions on air quality, and feed into London Councils’ responses to key relevant consultations on air quality, including developing proposals for new clean air legislation (as part of the Environment Bill 2019-21).

We are looking for the data to inform our understanding of:

Our air quality polling work will information will inform London Councils’ position on air quality and help steer our responses to key consultations and policy development work with external stakeholders.

The polling was conducted by Kantar. Kantar conducted an online self-completion survey. Kantar is one of the world’s leading data, insight and consultancy companies. Working together across the whole spectrum of research and consulting disciplines, its specialist brands, employing 30,000 people, provide inspirational insights and business strategies for clients in 100 countries.