In December 2020, London Councils surveyed boroughs about their employment and skills services.

This survey shows that the majority (88%) of London boroughs continue to be offering an employment support service in 2020. Over half (54%) deliver this service in-house and 15 per cent commission it. The remaining boroughs offer a combination of in-house and commissioned services or signpost to local provision.

On average, boroughs’ estimated annual budget for employment services was £949,103, but it varied largely in the range between £150,000 and £3m. In terms of staff, on average boroughs employ 16 people, with one borough employing three and another employing 50 staff members. The number of people using borough employment services annually also ranges significantly between 100 and 2,700, with an average of 996.

The most common services offered by the vast majority (92%) of boroughs include access to local vacancies, help with CV and job applications, employment advisors and support around apprenticeships. Interestingly, while there is a weak correlation between boroughs’ budget for employment services and the number of people accessing the service each year, the size of the budget is correlated to the number of staff employed by boroughs. This suggests the intensity of support offered to service users varies.

Response to the Covid-19 pandemic

The vast majority (92%) of the boroughs surveyed said they had to change their employment service in response to the pandemic, with many boroughs (79%) providing more online access and support and two-thirds (67%) changing their service offer.

Most of London boroughs are also engaging with the government’s Plan for Jobs in response to the pandemic. The most common elements of the Plan adopted by boroughs included Kickstart (as a gateway organisation, 77%), apprenticeships support (65%), DWP Flexible Support Fund (62%), Kickstart (as a direct employer, 58%) and WHP JETS (50%).

(2) Engagement with the Plan for Jobs 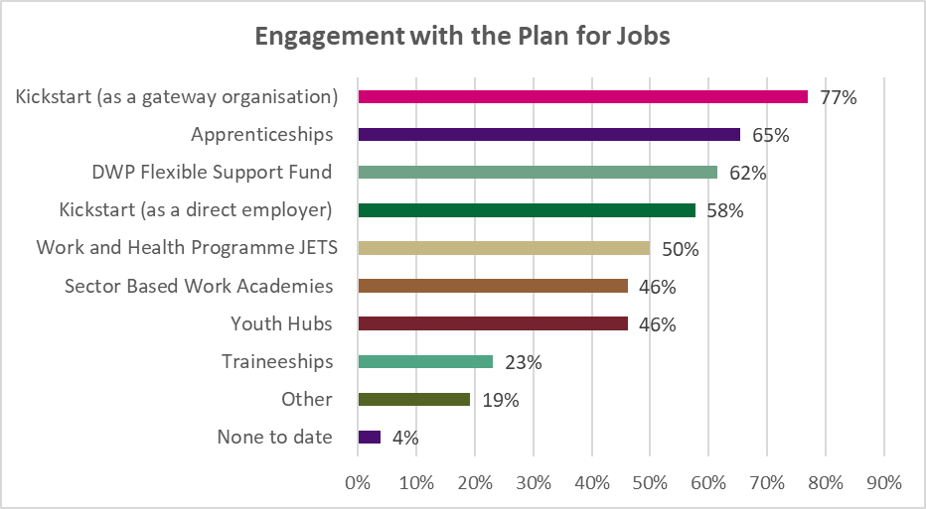 The vast majority (88%) of boroughs surveyed have been involved locally or sub-regionally in developing a ‘no wrong door’ approach. Examples include closer interaction with adult learning providers and employers (78%), multi-agency employment and skills hubs (70%), digital platform to guide people to the right services (61%) and co-location with JCP (52%). This suggests that work to expand the ‘no wrong door’ approach across London should build on existing local activity.

(3) Involvement in a No Wrong Door approach 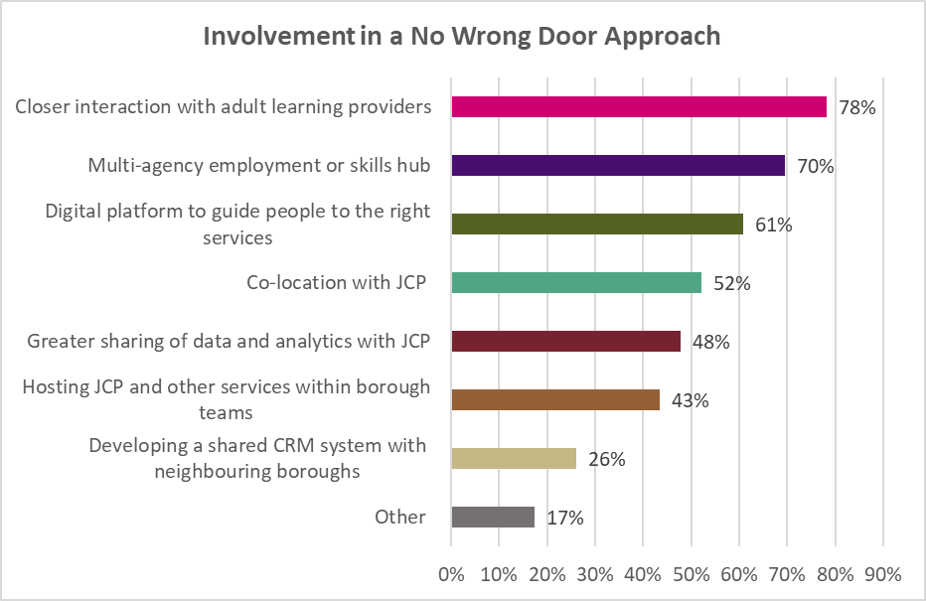 Four in five (81%) of the boroughs surveyed said that their Adult and Community Learning Service (ACL) is linked to their employment service, while three quarters (77%) said they provide skills support to residents in addition to the ACL service. These links between employment and skills services appear strong but may need to be strengthened further given the impact of the pandemic and the structural changes within some sectors of London’s economy.

In terms of key priorities to support residents into employment, almost two-thirds (65%) of boroughs prioritised providing employment and skills support to their most vulnerable residents. Others focused on improved IAG and personalised support (35%), building skills for growing and resilient sectors (35%) and supporting digital access and skills (31%).