Every year, London Councils collects data from all London boroughs on:

In each case, London Councils also requests data from boroughs on the age and level of each apprentice and the number of apprentices in each category who were previously NEET (not in employment, education or training).

This year London Councils has also gathered information on how boroughs are performing against the public sector apprenticeship target and delivery of apprenticeships in schools. 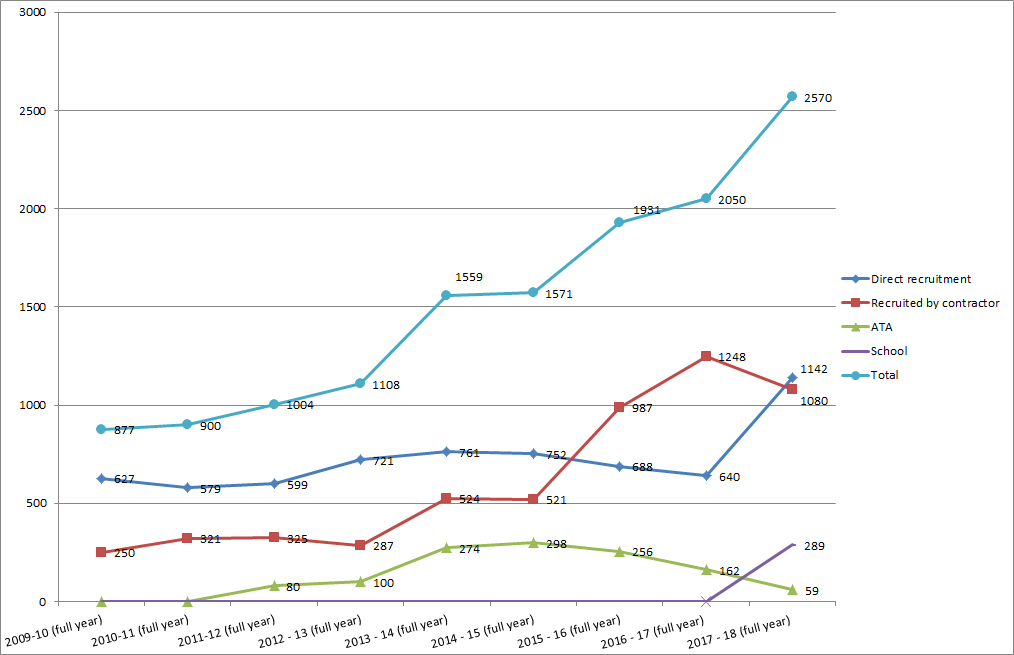 There has been a noticeable decline in the number of apprentices reported as previously NEET (not in employment, education or training) by borough, a continuing trend for 2013-14. 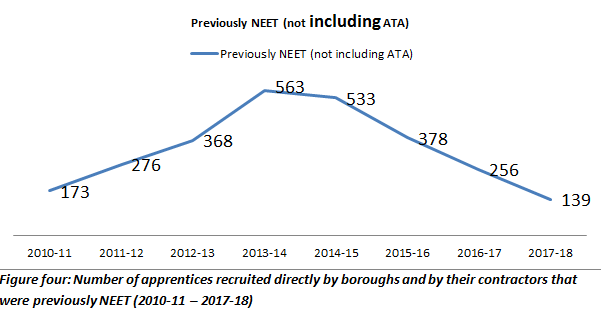 There is significant variation in the number of apprentices recruited by each borough, which can be due to a number of different factors including the maturity of a borough’s apprenticeship programme, planning and delivery structures, demand for apprenticeships within the organisation and amongst local employers, the ability to recruit appropriate apprentices, ability to source appropriate training and levels of engagement.

Four boroughs were able to meet or exceed the 2.3% public sector apprenticeship target in 2017-18. Despite the 78% increase in directly recruited apprentices, collectively London boroughs would have needed to create an additional 1667 apprenticeships to achieve this target.

Although there was a 13.5% decrease in the number of apprentices recruited in the supply chain, London Councils believe this area remains under-reported and does not accurately represent the opportunities created by boroughs through relationships with their contractors.

London Councils welcome last week’s announcement from the Chancellor to raise the cap on the amount of levy employers can transfer to their supply chain from 10% to 25%. Not only will this enable boroughs to support workforce development across their contractors and commissioned services, it will also enable other employers in key sectors with large supply chains to create more apprenticeships.

Under-reporting may also account for the drop in apprentices recorded as NEET prior to employment. Only 10 boroughs provided this data, down from 13 in 2016-17 and far below the 23 boroughs who reported on this in 2014-15.

Although only 3% of apprenticeships created by boroughs were of a higher level, London Councils expect this to grow as relevant apprenticeship standards become available for delivery such as Social Worker, Chartered Town Planner and Youth Worker.

Following the first year London boroughs have been working towards the public sector target, London Councils estimate that an additional 1667 opportunities would have needed to be created to collectively meet the target. This is an extremely challenging, possibly unrealistic target that will be hard to sustain and which was only achieved by four boroughs in 2017-18.