Every year London Councils collects data from all London boroughs on:

This year we included additional questions around diversity, including ethnicity, age, gender and disability. We also included additional questions around the number of apprenticeships boroughs had helped deliver by working with businesses not in the supply chain and the number of starts generated by apprenticeship levy transfers. 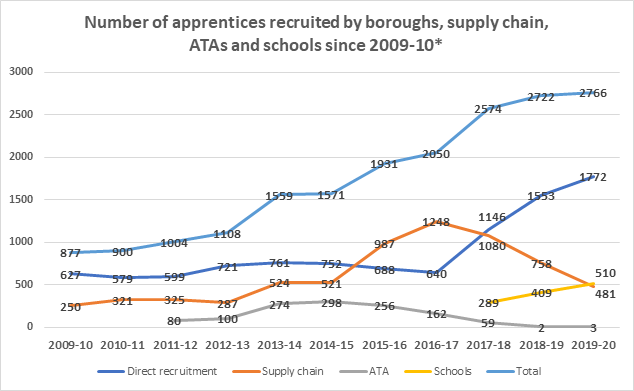 *Graph does not include data collected for the first time this year on apprenticeships generated through levy transfers and through working with local employers not in the supply chain.

The data shows that the total number of apprentices employed by boroughs continues to rise each year. Boroughs directly employed 1,772 apprentices, a 14% increase on the previous year. This is almost three times the amount generated in 2016-17, the final year before the apprenticeship levy and public sector target were introduced.

Only three apprentices were employed through an ATA, and all of these starts were reported by a single borough. In recent years boroughs have effectively ceased to use ATAs to recruit apprentices, which can be partly explained by the restrictions on transferring apprenticeship levy funds to ATAs in the new system.

A total of 89 apprenticeships were generated through apprenticeship levy transfers from twelve different boroughs. This is the first year that we have collected this data. 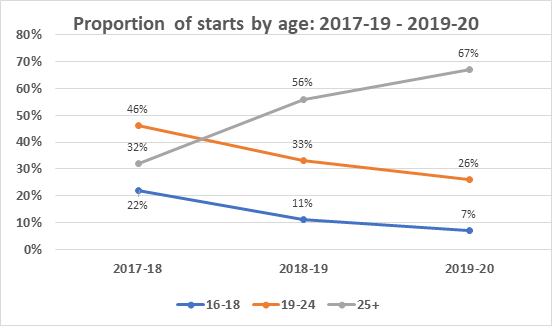 Data on the level of study was provided for around 99% of apprenticeships reported. For directly employed apprentices, the proportion at each level was as follows: 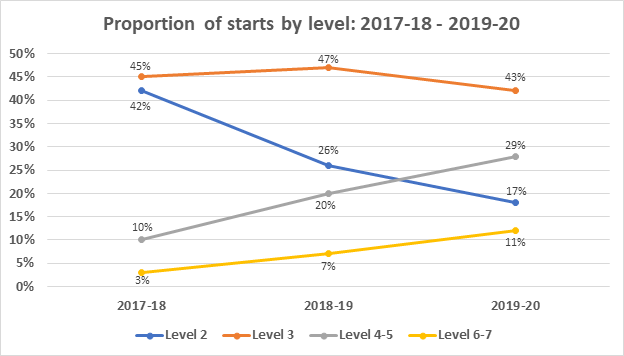 182 apprentices employed directly within the council, or 10% of the total, were recorded as previously being NEET. This represents an increase from 75 apprentices last year and is the first year this figure has risen since 2013-14. This can partly be explained by an improvement in reporting, as 20 boroughs reported NEET data this year compared to nine the previous year. Just 2% of apprentices in schools were recorded as previously being NEET, although fewer boroughs were able to supply data on this.

This is the first year that London Councils has asked for data on ethnicity and disability. Not all boroughs were able to supply data on ethnicity, and some were only able to supply partial data. Some provided data on ethnicity but not in the same categories we had requested (for example listing BAME as a single category), so we have had to omit these responses for the sake of consistent reporting. In total, ethnicity was provided for 71% of apprentices directly employed by boroughs. This broke down as follows, with the percentage for the council workforce as a whole listed in brackets: 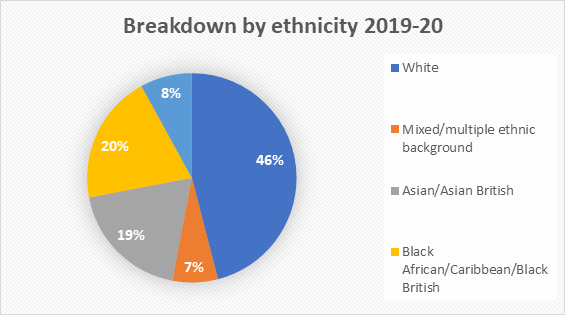 The Public Sector Apprenticeship Target came into force from April 2017. Local authorities are required to create new apprenticeship starts equivalent to at least 2.3% of their staff over the period of 1 April 2017 to 31 March 2021.

Six local authorities were able to meet or exceed the 2.3% target in 2018-19, up from two the previous year. Information reported on organisational headcount and achievement of the target is presented in the table attached to this report.

Headcount data is based on a combination of borough headcount and schools where the local authority is the employer (community, voluntary-controlled, community special and maintained nursery schools). The headcount data for schools is based on government data from November 2018, as more recent data has not yet been published. Therefore the actual percentage figure for the public sector target may vary slightly when boroughs submit this information to government later this year. The local authority headcount data was collected by London Councils and is taken from 31 March 2019, the start of the financial year being reported on.

In some cases boroughs submitted their own headcount data. In these instances we have used this data rather than the data obtained from the Government/London Councils.

Significant variance in headcount can be explained by the makeup of schools locally. For example, academies, voluntary-aided and independent schools are not subject to the borough’s apprenticeship levy. The makeup of local school has a significant impact upon borough’s headcount and therefore their ability to meet the public sector target.

Collectively, London boroughs would have needed to create an additional 1,435 apprenticeships to meet the public sector target. The average performance against the target was an average of 1.41% compared to 1.23% the year before.

Boroughs created 321 more apprenticeships through direct recruitment and in schools than in the previous year. 20 boroughs increased the number of apprentices recruited directly and through schools compared to 2018-19.