Apprentices awarded for their outstanding work in local government

London’s best and brightest apprentices have been honoured for their invaluable contributions to local government at the London Borough Apprenticeship Awards.

Now in their seventh year, the Awards recognise the excellence of apprentices working across London local government in a range of sectors including housing; finance; regeneration; and waste and recycling.

The Awards are run by London Councils, which represents the 32 boroughs and the City of London. The ceremony was held at Plaisterers Hall on Friday 22 September 2017.

Boroughs also celebrated the achievements of London borough mangers as well as their work with contractors and supply chains, which has been central to creating quality apprenticeship opportunities that develop apprentices and nurture their skills.

“Each year the London Borough Apprenticeship Awards recognise the talents and hard work of apprentices and London borough managers. Apprenticeships provide real opportunities to people from all backgrounds to cultivate their talents and begin successful careers despite the challenges they may face.
“I would like to congratulate all of the nominated apprentices and managers as well as award winners, who together have helped to drive success in their boroughs. They truly represent the best of what London local government can do.
“Last year 2,000 new apprentices were hired by boroughs and their supply chains, meaning more than 11,000 new apprenticeships have been created by London boroughs since 2009.” 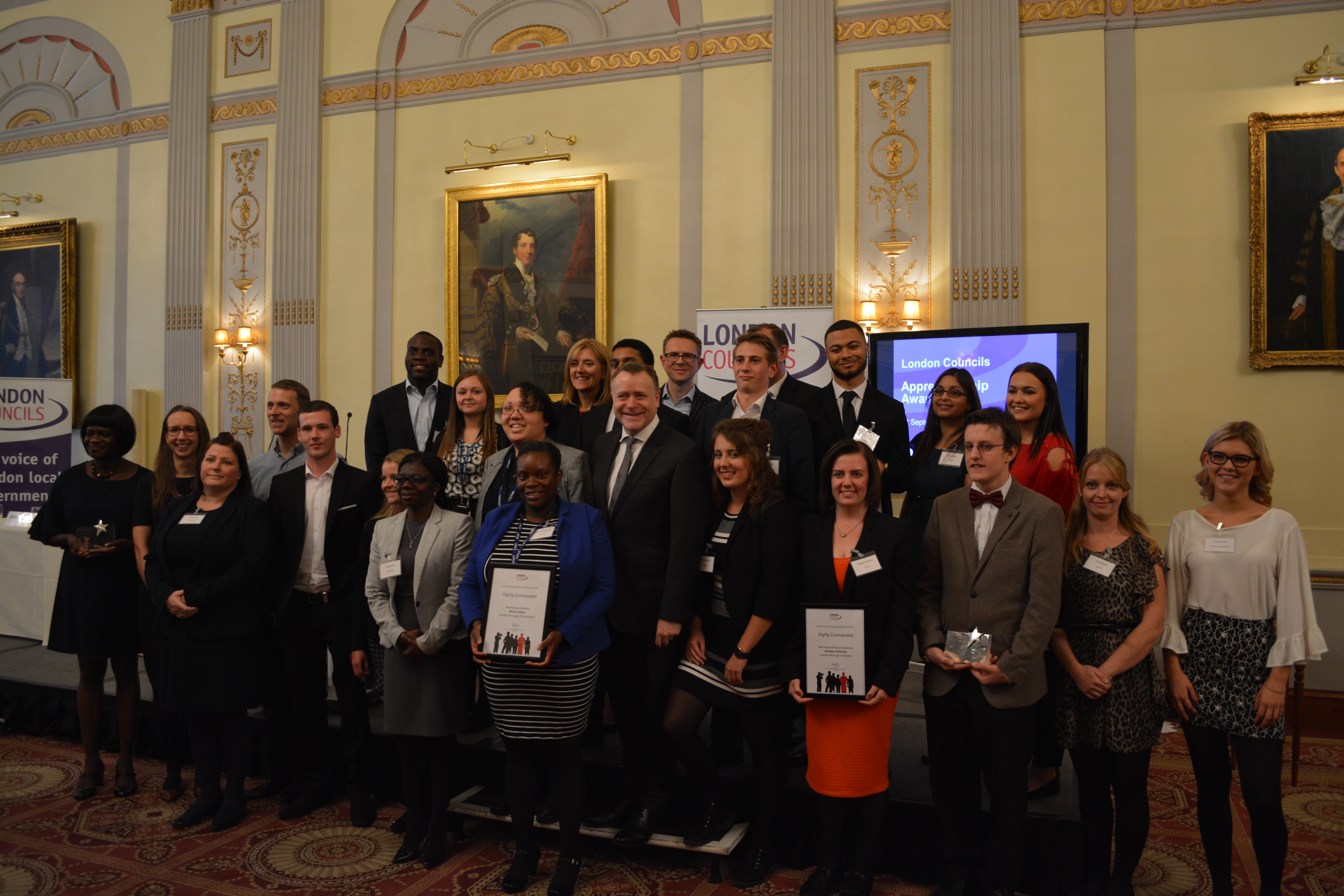 Apprentice of the year

A single mother of twin toddlers moving back into work, Carly became one of the first apprentices aged 25+ to join the council. Despite facing a number of personal challenges with financial support for housing and childcare that made her first few months difficult, Carly’s commitment to her qualification shone through. After completing her Level 2 Customer Services Apprenticeship, she was offered a permanent role at Gospel Oak Children’s Centre as Administration Finance Officer. The centre had been operating with no administrative support, so Carly faced an eight month backlog, but was unfazed by this challenge. She introduced new systems and spotted issues that had previously gone unnoticed, leading to savings in the education budget. Carly also enthusiastically agreed to contribute to magazine articles to promote the benefits of starting an apprenticeship later in life. She is described by colleagues as an excellent advocate for the centre and a terrific role-model for other parents returning to work.

Best Contribution by a New Apprentice

Jordan is a Business Administration Apprentice, working in Housing Finance. Described as proactive, hardworking and dedicated, Jordan has worked in many sections of Finance Data services during his apprenticeship, quickly adapting to acquire the new knowledge to be efficient in his roles. He was particularly crucial when the Council moved to the 100% Purchase Order system raising awareness with staff across the Council and engaging with suppliers. Jordan has also been involved in the implementation of the new shared Sutton/Kingston council finance service and was part of the recommissioning project of a new council housing system. A popular member of staff, Jordan is a role model to younger members of the finance team. He is the go-to person for fellow apprentices and has assumed a mentoring role, providing advice and guidance on assessments and training. Jordan is also visually impaired and has worked to promote and champion the recruitment of others with visual impairments, including giving a speech at a recent RNIB event based on his own experiences.

Best Progression by an Apprentice

Elisha joined Bexley as a level 2 apprentice in Children’s Social Services. Despite only being 18 years old, Elisha demonstrated great empathy and professionalism and always went the extra mile. After completing her apprenticeship, she successfully applied for a secondment in the Chief Executive’s office. Elisha flourished in this role and quickly became relied upon by senior leaders within the organisation. Her desire to ‘want to make a difference’, excellent communication and influencing skills, friendly disposition, and ability to work to close deadlines were all greatly valued. Elisha was quickly made permanent, going from Level 2 apprentice to a PA supporting a Deputy Director in just 30 months. Elisha also promotes and supports apprentices in the council, speaking at events about her experiences, supporting the council’s graduate recruitment days and helping to organise the annual STARS event.

Fen is Lewisham’s Economy and Partnership Manager. She has managed the award winning Mayor’s Apprenticeship Programme in Lewisham since its inception in 2009 and in 2016 oversaw the creation of the Lewisham Construction Hub – a project that will create 100 apprenticeships a year. Fen has done an outstanding job in helping apprentices progress through the council, sourcing and funding additional qualifications and training at every opportunity. She has been praised for her supportive management, guidance and encouragement and her excellent record in helping apprentices progress into permanent positions.

In the last year, Camden has delivered 187 apprenticeships with employers including the Wellcome Trust, Great Ormond Street and Lord’s Cricket Ground. They worked with the Francis Crick Institute to recruit their first ever Laboratory Technician Apprentices, all four of whom were female, helping to promote science careers to local residents. Building on that success, Camden has also been working with local employers like Google, UCL and the Knowledge Quarter to promote higher apprenticeships within STEAM subjects. Their Adult Apprenticeship Pilot scheme supported employers to provide flexible, part-time apprenticeships for parents, with 75% successfully moving into work. 143 apprenticeship opportunities have been negotiated through the council’s Better Homes programme, and they are working hard to support local employers to make the best use of the apprenticeship levy, including two events specifically for local schools, providing guidance on the changes, opportunities and recruitment.