The number of apprenticeships for people who need additional support to enter the world of work could plummet if the government does not review the terms of its apprenticeship target.

London Councils, which represents the 32 boroughs and the City of London, is concerned that the government’s proposed new apprenticeship target for local authorities is not realistic. This is because 50 per cent of the target is based on the workforce of grant-maintained schools, which is not under council control.

This could mean that individuals with Special Educational Needs or from disadvantaged backgrounds may miss out, as councils will have to focus on meeting the target and will not have the time and resources needed to offer additional support.

The government’s apprenticeship target requires every public sector organisation to ensure that 2.3 per cent of their employees are apprentices from April 2017.

“While we support the government’s plans to encourage apprentice recruitment, it is unfair to include school employees in borough workforce headcounts when calculating the apprenticeship target. This doubles the target for councils, yet they cannot influence schools to create more apprenticeships.

“An unrealistically high target risks undermining the government’s ambition to create opportunities that benefit employers, apprentices and the economy. London boroughs are really good at helping people with Special Educational Needs or from disadvantaged backgrounds access apprenticeships, but these more vulnerable groups of people may miss out in future if public sector bodies have to focus on a target that is unrealistically high.

London Councils is calling on government to:

1. Between April 2015 and March 2016, London boroughs have directly recruited 944 apprentices. Source – data collected by London Councils from London boroughs. This data includes those directly recruited by the local authorities and those employed by an Apprenticeship Training Agency (ATAs) as the government target is currently proposing a methodology that allows apprentices employed by ATAs and who work for, but are not directly employed by, the body to be counted towards the target.

2. The currently proposed methodology from the government will require boroughs to recruit 4,674 apprentices. This represents a 400 per cent increase on current activity. Source – headcount data provided by the Department of Business, Innovation and Skills: https://www.gov.uk/government/consultations/public-sector-apprenticeship-targets.

3. London boroughs have also generated 987 apprenticeship opportunities in their supply chains between April 2015 and March 2016.

4. London Councils has created an infographic to illustrate our concerns. Please see below. 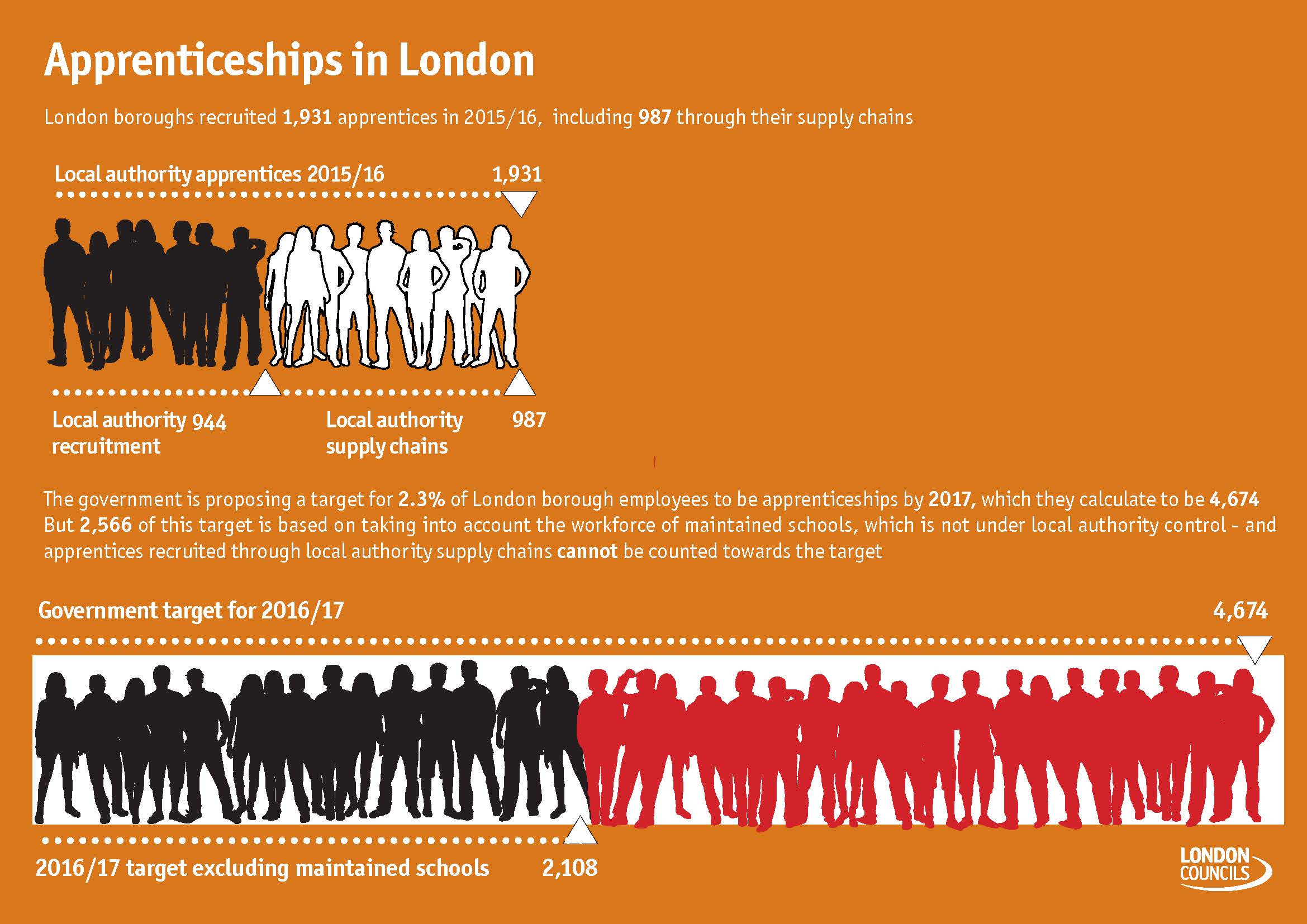