London’s boroughs are this week marking 50 years since they were established, in April 1965

The boroughs were set up by the London Government Act (1963) in the midst of the most noticeable social upheaval since WW2, as ‘Swinging London’ was in ‘full swing’.

To mark the day, soul singer and 1960s mod hero, Geno Washington (a Londoner for over 50 years), met the Lord Mayor of Westminster, Councillor Audrey Lewis in Carnaby Street.  The iconic shopping street came to symbolise the optimism of the era, when in April 1965 the press announced, ‘London – The most exciting city’*.

They were joined by the cast of the hit west end musical, Sunny Afternoon, nominated for five Olivier Awards, which tells the story of The Kinks, one of the biggest selling acts of 1965. The icing on the cake was vintage scooters from the mod era courtesy of Soho’s world-famous, Bar Italia Scooter Club. 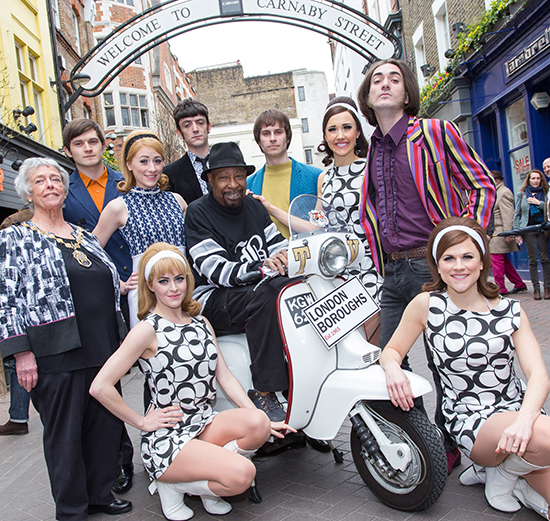 Geno Washington, originally from Indiana in the USA, said;

“You have not lived until you come to London. Soho was ‘home’ in 1965, we played in all the clubs – the Roaring 20s in Carnaby Street, the Flamingo in Wardour Street and many more. It’s where I met my wife and I’ve lived in London for over 50 years, it’s just fantastic, magical.”