In September 2019 the Ministry of Housing, Communities and Local Government (MHCLG) published the Indices of Deprivation 2019: the official measures of relative deprivation for small geographic areas within local authority boundaries called Lower-layer Super Output Areas (LSOAs) in England. The Index of Multiple Deprivation (IMD) brings together seven indices into one overall index which ranks every small area in England from 1 (most deprived area) to 32,844 (least deprived area).

The English Indices of Deprivation 2019 (the Indices) is the sixth release in a series of statistics produced by MHCLG, first published in 2000. The 2019 version is based on broadly the same methodology as the 2015 Indices, using 39 separate indicators, across seven "domains" of deprivation, which are combined to calculate the overall IMD. However, the local authority geographies have changed over time, so not all the sub-domain measures can be directly compared at this level.

The illustration below shows the seven domains and the relative weighting each is given in the overall IMD. The data underpinning most of these indicators relates to the year 2015/16: the latest year that comparable figures are available across all domains at the LSOA level. 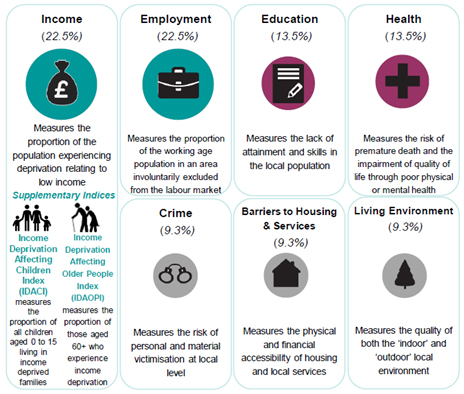 What are the Indices of Deprivation?

The Indices are designed to measure multiple forms of deprivation at the small spatial level across England on a relative scale. It is common to describe how relatively deprived a small area is by saying whether it falls among the most deprived 10 per cent, 20 per cent or 30 per cent of all small areas in England (although there is no definitive cut-off at which an area is described as ‘deprived’).

While primarily designed to be a small-area measure of deprivation, they are commonly used to describe deprivation for higher level geographies, including local authorities, by aggregating LSOA data. Authorities with lower tier responsibilities (which include London boroughs) are ranked between 1 and 317 (1 being the most and 317 the least deprived district in England), and those with upper tier responsibilities (also including London boroughs), are ranked from 1 to 151. Summary measures are also published at local enterprise partnerships and clinical commissioning group level.

What can’t the Index of Multiple Deprivation 2019 be used for?

As they are a relative measure, the Indices cannot be used to measure the real change in deprivation in an area over time – though they often are. For example, while an area can be said to have become more deprived relative to another area, it cannot technically be said to have become more deprived compared with itself in previous versions of the Indices, as it may be that all areas had become more deprived to a greater extent. The Indices should not, therefore, be used to compare scores for an individual area with previous versions (2015, 2010, 2007, 2004 and 2000). However, as a relative index it is possible to compare rankings over time.

Other things the Indices cannot be used for include:

There are several ways in which the findings can be presented when comparing across local authorities, the most common are to report the rank of average rank across each domain; and the proportion of LSOAs within a local authority area that fall within the 10 per cent most deprived nationally. The first is useful for comparing the average level of deprivation across an area relative to other areas; the second shows where there is high concentration of very deprived areas within an area.

The proportion of LSOAs in most deprived 10 per cent nationally

Across England as a whole, Middlesbrough, Liverpool, Knowsley, Kingston upon Hull and Manchester remain the five local authorities with the highest proportions of LSOAs among the most deprived 10 per cent. In London, Hackney has the highest proportion of areas within the most deprived 10 per cent nationally (11 per cent of its LSOAs). It is ranked as the 78th most deprived authority in England on this measure; the next highest is Haringey (ranked 84th), followed by Kensington & Chelsea (ranked 91st).

The map below shows the contrast of deprivation across London (the darker areas represent the more deprived areas). 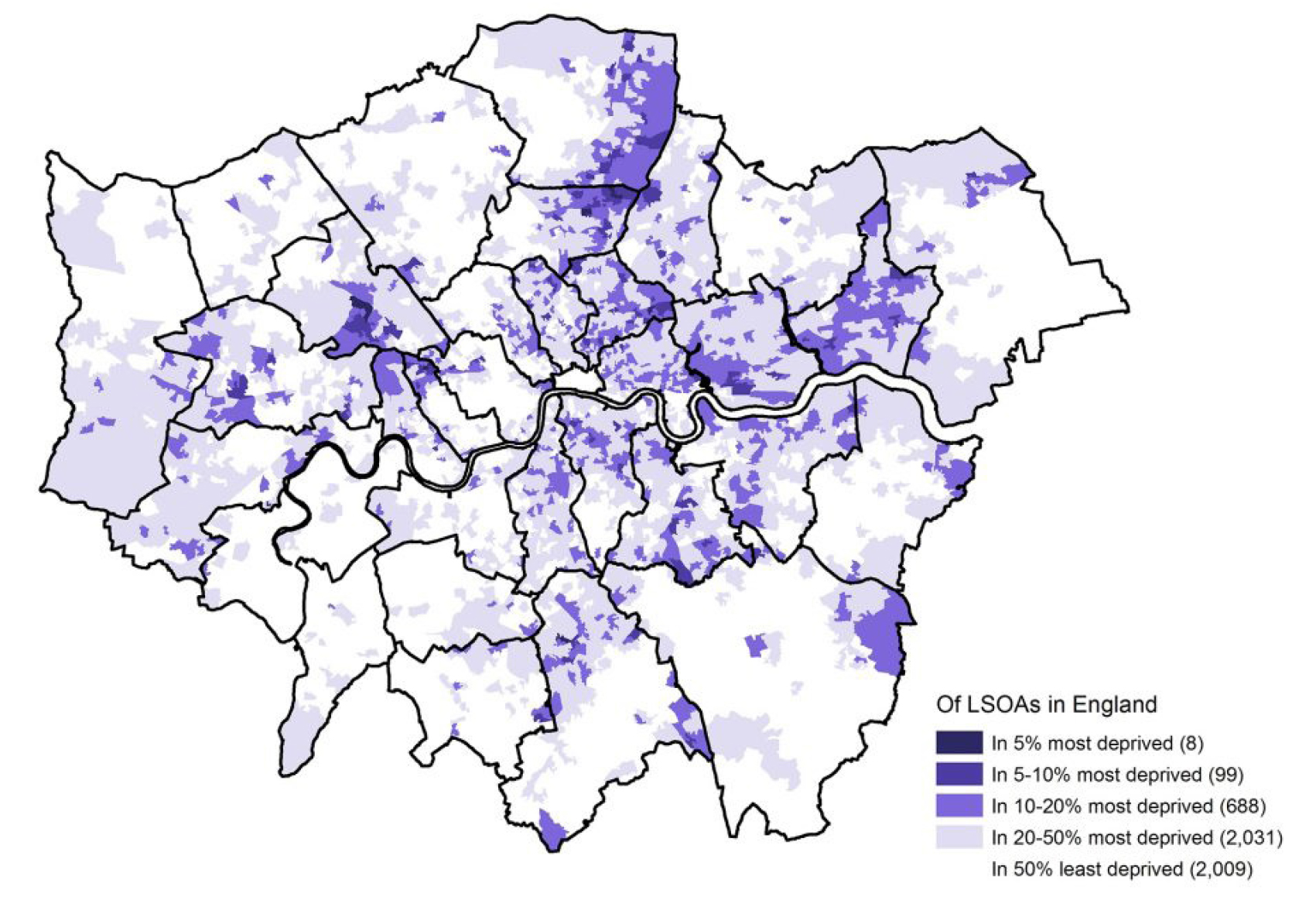 London’s most deprived boroughs have become significantly less deprived when ranked against other parts of the country. For example, the proportion of highly deprived LSOAs in Tower Hamlets has reduced from 24 per cent to 1 per cent and in Newham from 14 per cent to 2 per cent, when compared with the 2015 Index (recast to current boundaries).

The Income and Employment indices attract the largest weightings within the overall Index of Multiple Deprivation (22.5 per cent each). Income deprivation includes the proportion of the population on low incomes, including people that are out-of-work, and those that are in work but who have low earnings. While the measure includes adults and children receiving various welfare benefits1, it also includes anyone whose income is below 60 per cent of the median before housing costs. As housing costs are significantly higher in London, this is likely to undercount the true extent of income deprivation in the capital.

Employment deprivation includes the proportion of the working-age population in an area involuntarily excluded from the labour market, due to factors such as unemployment, sickness, disability or carer responsibilities.

The Income Deprivation Affecting Children Index (IDACI) is a supplementary income index that isn’t included within the overall IMD, but which measures the proportion of all children aged 0 to 15 living in income deprived families. Eight London boroughs rank in the most deprived 10 per cent based on rank of average rank.

Similarly, the Income Deprivation Affecting Older People Index (IDAOPI) is a supplementary income index measuring the proportion of all those aged 60 or over who experience income deprivation. Eighteen London boroughs rank in the most deprived 10 per cent, based on rank of average rank and more than two in five older people are income deprived in Tower Hamlets and Hackney. Seven of the most deprived 10 districts based on the IDAOPI are London boroughs - this is unchanged from the 2015 Index.

London boroughs compare well with other areas on the health and disability deprivation measures, which look at morbidity, disability and premature mortality. No boroughs feature in the 32 most deprived on either the average rank measure, or the high proportion of most deprived LSOAs measure. In fact, Barnet, Harrow, Kingston upon Thames and Richmond upon Thames rank in the 10 per cent least deprived for the rank of average rank.

Crime, Barriers to Housing and the Living Environment

London shows comparatively higher levels of crime deprivation, measured by high levels of crime categorised as, violence, burglary, theft or criminal damage. London accounts for seven of the 32 most deprived authorities on average rank, and two of the top 32 in terms of the high proportion of most deprived LSOAs measure.

London has very high levels of deprivation within the barriers to housing domain, which measures road distance to facilities, homelessness, overcrowding and housing affordability. London boroughs account for 24 of the 32 most deprived areas on average rank, and 15 of the top 32 as measured by concentration of most deprived LSOAs.

Finally, within the living environment domain (measuring housing in poor condition, housing without central heating, air quality and road traffic accidents), London accounts for 15 of the 32 most deprived authorities on average rank; and has four of the top 32 authorities for the proportion of LSOAs in most deprived 10 per cent nationally.

There are several emerging messages from the 2019 Indices with regard to London. In terms of concentration of really deprived areas within a local authority (i.e. those with the highest proportion of LSOAs that fall within the 10 per cent most deprived in England), London boroughs have become relatively less deprived in comparison to other parts of the country. However, with a third (33 per cent) still within the top 30 per cent most deprived across England, London, as a whole, remains comparatively more deprived than England as a whole.

Across the individual domains of deprivation, London continues to compare relatively well on measures of education and employment, reflecting the higher rates of employment and qualifications of its inhabitants. However, the fact that income deprivation is comparatively high suggests there could be an imbalance between wage levels and the cost of living in some areas, particularly for the most vulnerable, children and the older population. The income domain does not fully take into account the high rental and housing costs in London, and therefore may underestimate the levels of monetary deprivation.

It is unsurprising that London boroughs are among the most deprived within the crime, access to housing and the living environment domains, reflecting some of the broader issues inherent in highly built up urbanised areas. Indeed, the barriers to services domain may understate London’s deprivation as it uses geographic distance to services rather than availability (for example GP or schools places availability).

The Indices are used within several different funding formulae. The National Funding Formula that determines the Dedicated Schools Grant allocations uses IDACI, and some areas use the Indices in their local schools funding formulae. Other specific funding formulae that use the Indices include the Troubled Families Programme and the Police Funding Formula. The 2010 Indices were used within some parts of the complex funding formula that determines overall core funding (Settlement Funding Assessment) to all local authorities. This formula is being updated as part of the government’s "Fair Funding" Review of relative needs and resources – which will determine new funding baselines for all local authorities from April 2021 – and is likely to include various measures from the latest 2019 Indices of Deprivation.

On the whole, deprivation as measured by the IoD 2019, will be less beneficial for London boroughs than in previous iterations of the formula, although will still be an important indicator in showing higher levels of relative need in London compared with elsewhere.