This review is based on what is contained in the publicly available CAPs, or drafts that have been shared with London Councils before publication. Actions within these CAPs have been inputted into a database to show the alignment with London Councils seven climate programmes (see Table 1). In conjunction, a finance survey of London Deputy Treasurers Group was undertaken in March 2021 to examine CAP costs, funding sources and the climate-related financial challenges that boroughs face.

We recognise that a huge volume of effort and expertise has gone into the development of each individual CAP and there is much to learn from every one of them. It is also noted that boroughs do not always refer to these plans as a ‘Climate Action Plan’. 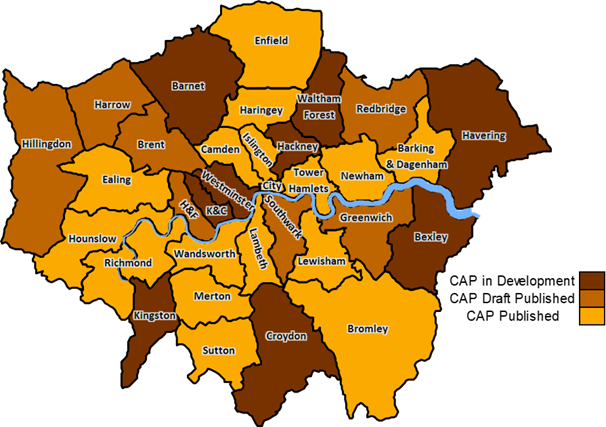 This review finds that, of the 24 CAPs so far published in full or draft form, there are a wide variety of approaches to data sources, length and scope of activities. The earliest date for achieving net zero carbon for the council’s own emissions (sometimes referred to as ‘carbon neutral’) is 2025, but most boroughs have set 2030 as their target. For borough-wide emissions there is a more varied picture of target dates, but most boroughs are aiming to achieve net zero before 2040 – well ahead of the UK’s statutory 2050 target.

CAPs and the Climate Programmes

There are 2,166 actions contained within the 24 published CAPs, which have been grouped into 302 specific actions. When assessed against the London Council Climate Programmes, we can see that 83 per cent the actions fall within the seven thematic areas, but some programmes – such as Retrofit and Low carbon transport – are much more strongly represented within the borough CAPs than others – such as Low carbon development and Green economy.

The 17 per cent of actions that do not sit within one of the seven climate programme themes are covered under:

Nine boroughs provided a cost estimate for their CAPs in the finance survey. While assumptions, including time periods, varied, the total estimated CAP costs provided by those nine boroughs was over £11 billion. While it is not yet possible to estimate a robust pan-London figure, initial modelling suggests the total cost of delivering commitments for all boroughs who have published net zero targets could potentially exceed £30 billion. Further work will be undertaken with boroughs to develop a consistent approach in order to provide a clearer understanding of the resource costs of CAPs – and provide a robust pan-London estimate. It is, however, already clear that only a very small proportion of the funds that will be needed is currently available to boroughs.

Two broad approaches to collaboration and community engagement have been taken alongside boroughs’ consultations on CAPs: citizen assemblies and summits; and environment networks made up of residents, the council and other experts. There are a wide number of partners engaged across various external organisations and levels of government. These include the voluntary sector, educational institutions and local businesses, among others. However, there are gaps in engagement, including around health. Regional collaboration between boroughs is only infrequently mentioned; lobbying actions are overwhelmingly targeted at national government, or on working with other organisations to lobby government for legislative change or increased funding.

Alongside a wide array of innovation and best practice, this review identifies a range of challenges:

A series of recommendations have emerged from the review, in summary, these address:

From these recommendations it is hoped that this review can help boroughs develop their plans and provide a useful survey of current practice, while also pointing the way to how boroughs can individually and collectively strengthen delivery in this critical area of work.