A new report by academics at the University of Leeds and commissioned by London Councils and Relondon gives an insight into consumption-based emissions at borough level in London for the first time. This briefing alerts members to some of the report’s main findings, some of the issues surrounding the measurement of consumption-based emissions and their role in achieving London’s climate change ambitions.

For the first time consumption-based emissions accounting has been developed at the borough level, providing an overview of trends in the period 2001 – 2018. The results show that boroughs have significantly reduced their emissions during this period, and the difference in emissions between the highest and lowest emitting borough has also declined. However, the pace of reduction is slower than what is needed to reach the two-thirds reduction target of the One World Living – Reducing Consumption-based Emissions programme lead by London Borough of Harrow on behalf of London Councils. Further work will be needed to develop a more granular understanding of lifestyles in London that can support effective interventions and policy recommendations.

Following the London Councils’ Joint Statement on Climate Change, published in December 2019, seven climate change programmes have been established. One of the programmes, One World Living, aims to reduce consumption-based emissions by two-thirds by 2030, focusing on food, electronics, textiles, and aviation. The inclusion of plastics into the programme is now also being considered. Two other major components of consumption, transport and buildings, are considered under separate programmes.

Consumption emissions differ from the typical method of measuring emissions. Greenhouse Gas (GHG) emissions are usually measured as territorial emissions, which are the emissions from activities within a given territory. They exclude emissions from international shipping and aviation, and any emissions embedded within the supply chain of imported goods and service.

The omission of international shipping and aviation and imports means that the carbon impacts of many activities undertaken by Londoners are not captured by the standard GHG emissions. Consumption-based emissions accounting fills this gap by including net imports, thereby measuring the total environmental impact of our lifestyles on the world.

As a leading global city, London has a responsibility to not only consider the impact of the emissions being directly emitted from the city, but also to consider the environmental impacts of the goods and services that it consumes which are produced outside of the city. By measuring consumption-based emissions, London can help its residents understand their wider impact and create demand for green goods and services, thereby helping to encourage sustainable consumption and production across the globe.

Our new household consumption-based account for London shows that emissions have decreased from 101 Mtonnes CO2e in 2001 to 74 Mtonnes CO2e in 2018 – a reduction of 27 per cent. Every London borough has seen a reduction in their consumption-based emissions, with Kensington and Chelsea reducing by the largest proportion (37.2 per cent) and Tower Hamlets reducing by the smallest (7.5 per cent).

However, London’s population has grown significantly over that period. When examining emissions on a per capita basis, the reductions are much larger. Newham has seen the largest reduction (44.0 per cent) and Tower Hamlets the least (31.8 per cent), with the mean average in London reducing from 13.56 tonnes to 8.43, a reduction of 37.8 per cent. In addition, the difference between the highest and lowest consuming borough has reduced markedly. In 2018, the lowest emitting borough was Newham with 6.0 tonnes, and the highest was the City of London with 11.2 tonnes.

Figure 1: Per capita emissions by Borough, 2018

Further consideration will be given to how this data can inform the baseline and forward targets for each theme within the One World Living programme, namely aviation, electronics, food, plastics and textiles, since aspects of these themes fall into different categories within the dataset. Part of this exploration will include other, complementary methodologies that can provide a more timely assessment of progress of emissions reductions; although this is currently the most robust methodology, it incorporates a three-year time lag in reporting.

Figure 2: National levels emissions per capita for a selection of countries 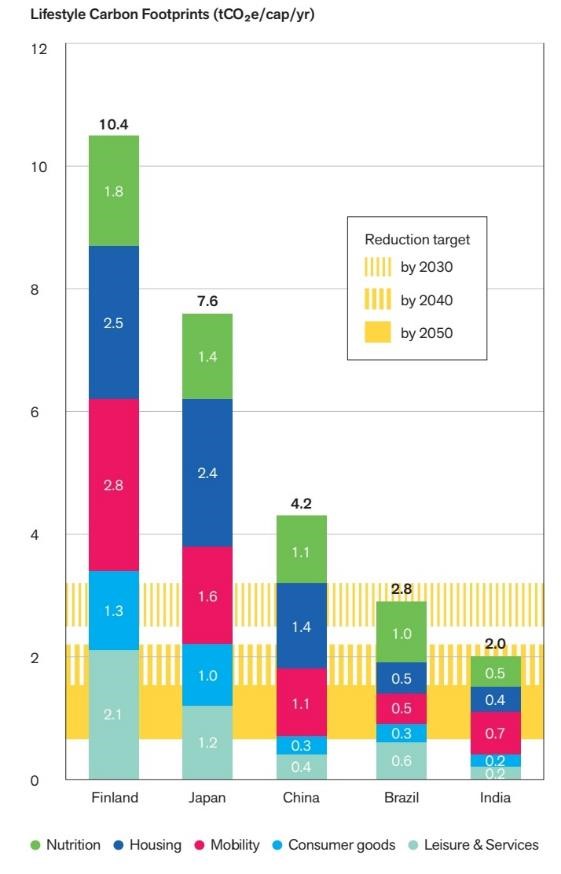 The report builds on the previous GLA commissioned report and demonstrates that reductions in London are not due to the overperformance of a few boroughs, but a clear trend across all boroughs, achieved in the absence of strong policy drivers. Furthermore, the gap between the largest and smallest emitters has reduced significantly over time.

Moreover, it is also understood that emissions correlate strongly to income, as higher income brackets tend to consume more

To place the boroughs’ emissions in perspective, an assessment by C40 Cities placed typical emissions of C40 cities in Europe, North America, and High-Income Asia at between 13 and 20 tonnes per capita, those of Middle-Income East Asia at around 10 tonnes, and those of Latin America around 5 tonnes. While it should be noted that the methodology used by C40 is not the same, it does indicate that even the highest emitters in London are among the lowest among their peers. A study of the national averages undertaken by the Institute for Global Environmental Strategies (IGES) for Finland, Japan, China, Brazil and India (figure 2, above) shows that boroughs range between around 20 per cent above the Chinese average at the lower end to around the average Finn at the higher end.

When boroughs consider the data for their individual borough, they will find it useful to remember that although emissions currently correlate with income, emissions reductions need not mean a reduction in quality of life. People make consumption decisions based on the choices they are presented with and/or in-line with their habits and routines. If all choices are inherently unsustainable, then those who can consume more will naturally emit more. The solution therefore lies in the decarbonisation of systems and the provision of alternative green choices in order to decouple emissions from income. Given that boroughs are extremely diverse with very different lifestyles amongst residents, Londoners will need support that is targeted at their specific context. The pathway to sustainability for a recent graduate in a house share is likely to look very different to that of a family in a social housing flat, or a family with a large house and car in the suburbs, or that of retirees.

The barriers to net zero transport for someone living in a low-traffic neighbourhood who can work from home, has easy access to public transport and whose daily needs are a walkable distance or can be easily cycled to on cycle lanes are much lower than someone who cannot work at home, must use a private vehicle for their work, and does not live in an area with strong public transport provision or with daily needs within a walkable or cyclable distance. Policy options in these cases would substantially differ, but without understanding what the different types of lifestyles are, and the proportion of residents following these lifestyles in each borough, it is not possible to identify the most effective solutions.

Another issue is understanding the reduction potential of activities and where there might be opportunities to pursue behaviours which require relatively low levels of resource but have considerable reduction impacts. Assessments of reduction impacts have been undertaken at the national level, and broad guidance has been developed but not in London. An example of this from the IGES report is shown in Figure 3 below.

Segmentation analysis and the development of a personal emissions calculator are two means of filling this gap. Through gathering lifestyle data, it is possible to divide society into segments and create data-driven, scientifically valid descriptions of the types of different lifestyles seen in London. Once such analysis has been conducted, it would be possible to then describe potential pathways to a sustainable lifestyle. A personal emissions calculator, which is based on London data and is therefore more accurate than those commonly found on line, can help residents understand what their current footprint is and where their personal hotspots are. One example of work undertaken in this area is the Shift 1.5 programme from SITRA, the Finnish Innovation Fund. Here, personas have been developed and pathways to sustainability described, incorporating what market and policy solutions will be needed to support the transition. An example is given in figure 4 below. Their work also includes an emissions calculator. 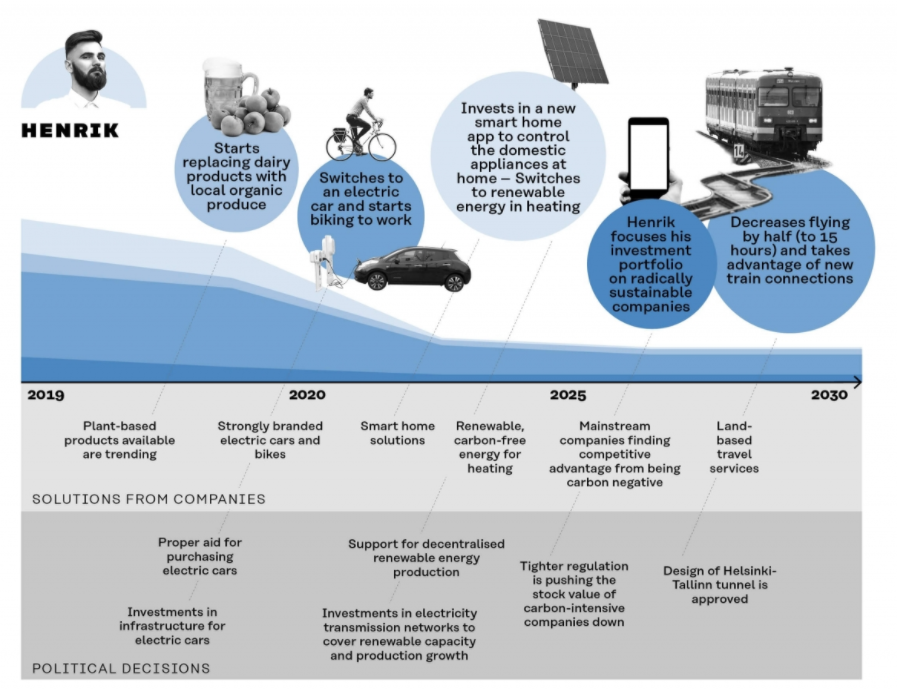 In summary, the consumption-based emissions accounting conducted by the University of Leeds has given London Councils and ReLondon useful preliminary data regarding the overall emissions across individual boroughs. This first step will need to be developed in order to be able to clearly understand consumption within London and how Londoners can be assisted to transition to sustainable lifestyles.