A majority of London boroughs have passed “climate emergency declarations,” with many pledging net zero targets, together with action plans to deliver them. This briefing gives an overview of the increasing urgency around climate action and the plans to meet carbon emissions targets in London.

In October 2018, the Intergovernmental Panel on Climate Change published its report on reaching the aspiration set out in the Paris Agreement to restrain global temperature rises to 1.50C above pre-industrial levels. The report highlighted, for the first time, the significant increase in damage to health, the environment and the economy of holding global temperatures below 2°C, instead of below 1.50C. In the UK, this was followed by the publication of the Committee on Climate Change’s report "Net Zero – the UK’s contribution to stopping global warming," and in June 2019 the Government legislated to increase the national target for emissions reductions from 80 per cent to net zero emissions by 2050. This is the most ambitious target for any nation, and puts the UK in a strong position to host the UN Climate Change Convention’s next meeting in Glasgow later this year. This “Conference of the Parties” (COP) will be a vital opportunity to secure global commitments that can meet the 1.5°C ambition, and as the host, the UK has a critical leadership role to play.

According to an August 2019 poll, concern about climate change has reached record levels, with half now “very concerned,” and the majority thinking that the UK should bring all emissions to net zero more quickly than by 2050.

In London, 26 boroughs and the Mayor of London have now passed climate emergency declarations, and those boroughs that have not passed declarations are also considering a greater focus on climate change. Councils have adopted a variety of targets to reduce council-generated emissions (see Map 1), though the majority have adopted a target of net zero emissions by 20301. Some boroughs have also adopted emissions reduction targets for their borough as a whole; the Mayor of London has a net zero by 2050 target for London as a whole. 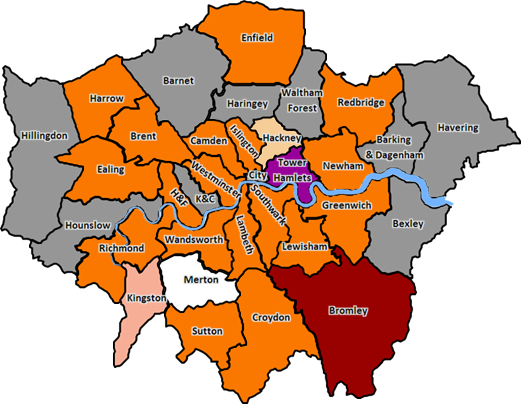 Responding to the upsurge in political concern around climate change, officer and political groupings across London have been working to develop coordination and collaboration around this agenda. London Councils convened a series of workshops for lead climate change officers in late 2019, to inform priorities for support to boroughs, London-wide programmes and national advocacy. London Councils has also started signposting existing resources and guidance. These three pillars of activity have been further developed with the London Environment Directors’ Network (LEDNet) and the Chief Executives of London Committee (CELC), both of which have established sub-groups to provide focused leadership and support on climate change. At political level, climate change has been discussed by both the Executive and the Transport and Environment Committee with great interest and shared ambition. London Councils will employ additional, temporary resources to lead on the climate change agenda for the next two years, given the importance of this area of policy.

London Councils and its partners are currently working on four key areas:

Guidance: Identify, support and share best practice on climate change action plans, as well as continuing to signpost the wider suite of guidance and resources.

Data: Establish a specific project with boroughs to understand how councils in London are approaching climate data, a common methodology for assessing and reporting carbon data and any further data-related tools that would be of value to boroughs.

Procurement: Identify opportunities to support low-carbon procurement of goods and services by boroughs, working with existing procurement groupings and experts. This may include common approaches and methodologies that could support the efforts of each individual borough.

Capability: Establish a programme of training and development for senior leaders in councils, to build their capacity and capability to govern and lead the delivery of London’s challenging climate targets.

On 13 November 2019, LEDNet and TEC met together at Westminster City Hall to discuss six major programmes of pan-London climate action, designed as collaborative programmes that can effectively support areas of emissions reductions that will be integral to the achievement of every borough’s targets. In a joint statement from the meeting, formally agreed at TEC and LEDNet meetings in December, the two groups agreed to “act ambitiously to meet the climate challenge that the science sets out, and find political and practical solutions to delivering carbon reductions that also secure the wellbeing of Londoners,” and set out agreed principles for climate governance, citizen engagement and resourcing. The statement also committed to “prioritise and support” the delivery of the six major programmes, by “pooling our experience, expertise and resources and working together collaboratively.”

The six programmes are:

#1 Retrofit London: Retrofit all domestic and non-domestic buildings to an average level of EPC B. Programme timescale: 2020 – 2030.

Ambitious commitments from local authorities in London and around the country will require significant support from the government. We will be developing and advocating a set of key asks with partners in local government and beyond, including in the run up to the Climate Change COP in Glasgow, later this year. These may include issues such as support for renewable energy infrastructure and electric vehicles, financing and support for retrofitting energy efficiency measures in homes and offices, and support for decarbonisation of the transport system.

We have seen a significant increase in the level of concern around climate change at every level, amongst residents, businesses and politicians across London and nationally. Recognising that the scientific community are recommending urgent action within the next decade, there is an expectation that boroughs will deliver ambitious carbon emissions reductions from their own operations, lead action in their boroughs to reduce business and resident emissions, and lobby for support and action at the national and even international level.

During 2020, most boroughs will be putting in place climate action plans. These will be the first opportunity for boroughs to set out how they will transform their operations and services to meet their council carbon emissions reduction targets, and how they will work in partnership with their communities to co-design and co-deliver activities that can reach borough-wide targets. There is a wide variety of guidance now available for boroughs, a summary of which can be found on London Councils’ website. In planning for activities that can meet their targets, boroughs should consider opportunities for joint work with neighbouring boroughs, sub-regional groupings and across London, and demonstrate both short-term action and planning for long-term emissions reductions. Mitigation and adaptation to climate change are both important aspects to consider.

In addition to direct carbon reductions, boroughs should also consider what underpins long-term climate action, including developing the capacity and capability of staff and members, developing robust, transparent carbon data and planning for accountability and comparability around carbon reductions.

Boroughs have already come together to agree collective ambitions via the TEC-LEDNet Joint Statement on Climate Change. These programmes will be very significant in supporting boroughs’ ability to meet their carbon reduction targets. In 2020, London Councils will be working with boroughs to embed cross-cutting teams and resources that can deliver these programmes.